Tri-Mountain is the go-to source for innovative corporate apparel, rugged yet fashionable outerwear, and race and sports wear - and all of these available in big and tall sizes! Take a fresh look at promotional apparel with 200 new styles from Tri-Mountain. The 2012 Collection reflects a commitment to creating modern cuts and colors for a range of audiences and occasions. There are expanded options in every category and roughly half the entire product offering is totally new! The unprecedented scope combines functional fabrics, features and fashion to create their best collection yet.  See the entire 2012 Tri-Mountain Collection here.

What We've Been Working On: Rah Rah!

We've been busy bees this week.  first we tackled the throne cover project and then threw ourselves headlong into this cool triple applique project for a local high school's cheer leading squad. 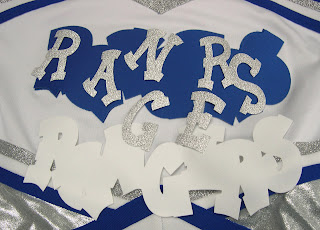 We started with some die-cut shapes and letters made to resemble the lettering on the teams old uniforms. 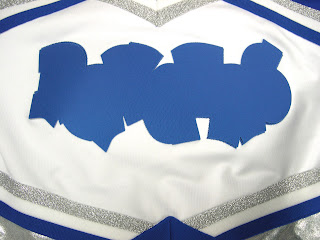 We placed the bottom layer on the uniform and stitched it on along the outer edges. 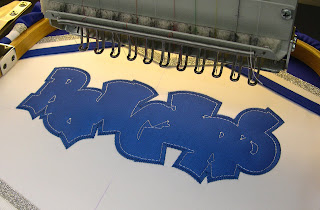 We then added top embroidery to serve as a guideline for placing the next layer. 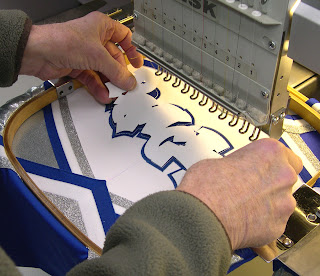 The middle layer is then lined up over the first... 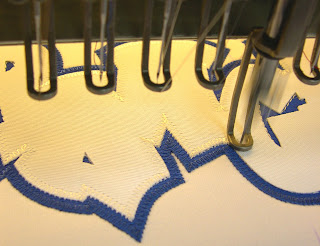 and stitched along the edges. 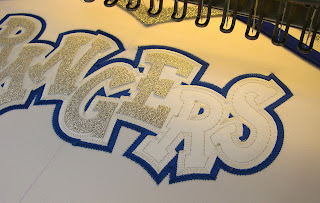 An outline is then stitched on top as a guideline for letter placement and the letters are then carefully placed on top. 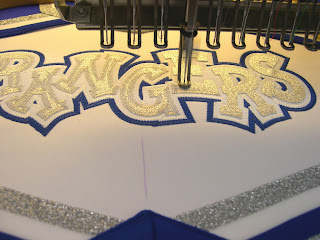 We then stitch around the edges of the letters 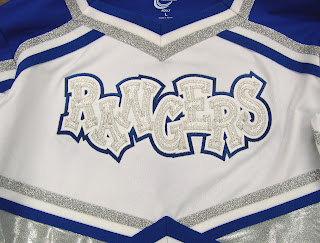 And with that we're ready to rock.  Go team!

It's a new year and we have lots of new products to show you!  Click here to see the latest active wear offerings from Bella, Hanes, Champion, and Jerzees, new sports wear from  Adidas and Augusta, new organic and eco-friendly offerings from our friends at Anvil.  We have loads of new styles too, like pajama pants, fashion scarves, canvas bags and a whole new product line of Safety Wear.  We even have brand new Made in the USA t-shirts.  Check out the complete catalog here and contact us for more information or to place your order today.

What We've Been Up To: Dress Up Your Throne

Who doesn't need a throne?  Well, most of us probably get through life without one, I suppose.  But if you do happen to have one, shouldn't it be as regal as possible?  Otherwise, what's the point?  For the past few months, we've been working with the fine people at Samadhi Cushions in Vermont to embroider a very specific design for them onto silk shantung fabric which will be used as a throne cover. 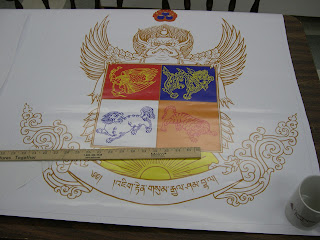 First we spent weeks hand-digitizing the intricate designs they supplied us with. 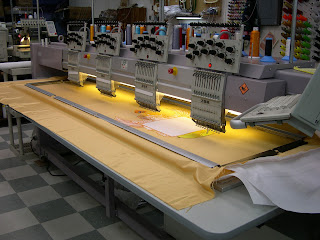 Then we had to place our mama- frame on our 4-head machine.  This frame, standing on end, is about 6 feet tall.  Needless to say, it is somewhat of a process getting it on and off our machine.


Some of the smaller pieces were then placed on the large fabric and appliqued on.
. 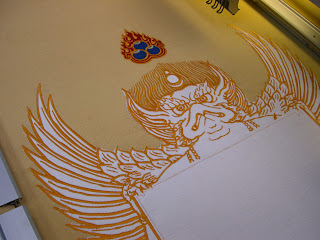 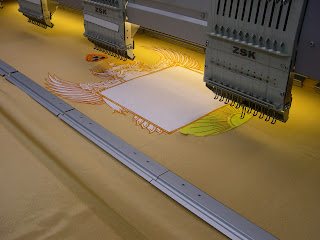 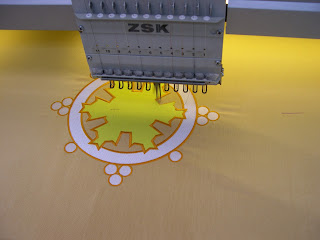 We then enhanced the designs with top embroidery 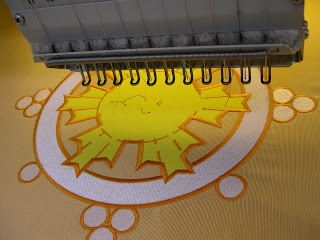 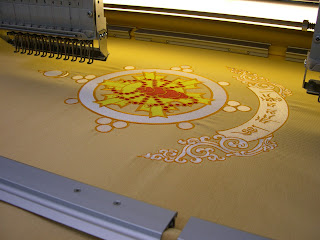 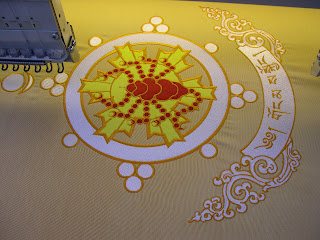 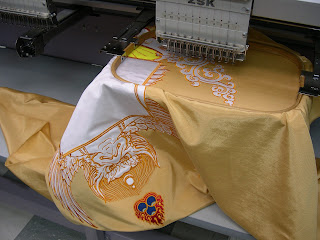 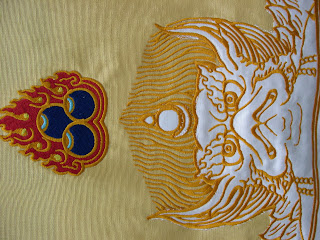 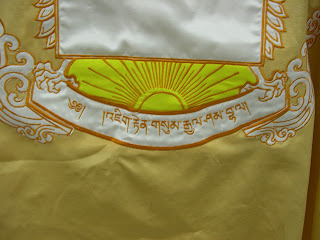 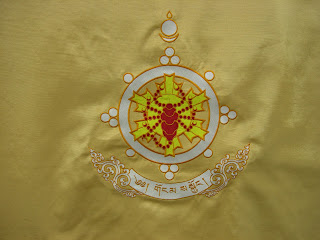 The final Throne back 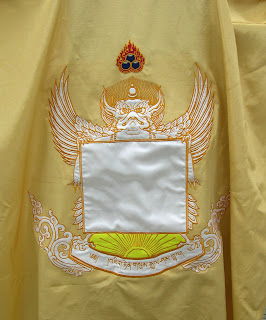 The Throne front   ( final except for center embroidered panels to be attached by customer).


We'd love to  thank Jeanette and Michael at Samadhi Cushions for the opportunity to stretch our creative muscles on this project aver the past several weeks.  It's been a challenge and a delight to create this for you.

Brand Your Business: Show us your skin!

Is there anyone out there who doesn't have a smart phone?  (OK - I don't.  But I don't even have a cell phone. ) Let's face it.  most Americans have a least one cell phone, and more and more of them are smart phones.  In fact, if you've ever gone to dinner with, or had a smart phone owner over to your home, you know that most people have a little... shall we say... separation anxiety when it comes to their phones.  So what better way to ensure maximum amounts of repeated exposures than to use a phone skin as your next promotional product?  They come designed for a variety of phone brands and styles and in loads of fun colors, too!  Contact us today and we'll help you get your logo on the best and most interesting promotional products out there.
Posted by EP Embroidery at 12:44 PM 0 comments

Whether you're looking for caps or jackets, polos or sweatshirts, bags or dress shirts, corporate or casual, you are bound to find what you are looking for in our brand new, updated Essentials catalog.  Featuring such brands as Columbia, OGIO, Nike Golf,  Port Authority, Jerzees and more, this is your go to resource for outfitting your team, crew, or staff.  See something you like?  (Well, of course you do!)  Contact us today to order!
Posted by EP Embroidery at 4:16 PM 0 comments

Brand Your Business: Reflect Your Sales

Another terrifically usable promotional item is a compact mirror.  It's the perfect giveaway for a salon, bath or lotion shop,  or a cosmetics or skin care distributor, but as it is so useful, truly any business could give it out and be assured of years of keeping your name in front of your customers.   Promotional products are a tried and true way of keeping your established customers coming back to you as well as gaining exposure to new customers.  Dollar for dollar, promotionals are one of the smartest and best ways to invest your marketing dollars.  Contact us today for how promotional products can help you expand your business.

Dedicated to those with a passion for competition, Nike Golf is the world's number one Golf apparel brand and we here at Embroidery By Everything Personal are you connection!  Combining a legacy of innovative thinking with high-performance design, each style gives you a decided advantage for success on and off the course.  Check out their latest lines of polos, caps and outerwear here and contact us for more information on these and other products.


One of our most popular jackets, the Glacier is constructed from a polyester stretch woven shell, which is then bonded to polyester microfleece with an added laminate film insert to repel water. The result is a wind-resistant, water-resistant jacket with four-way stretch that's perfect for corporate or weekend wear. featuring a 1000 MM waterproof rating and a 1000 G/M² breathability rating, this jacket will keep you warn and dry this winter.  Find more items like this on our website.

Brand Your Business: Turn the Page

Happy New Year, everybody!  We can't thank you enough for all your support this past year.  You've made our first year in our Cottage Street location a great one.  As one year comes to a close and another begins, it's a terrific time to reach out to your customers.  You might have even noticed some of your favorite suppliers and vendors sending a promotional item your way as a way of thanking you.  Don't you love getting that new calendar from the bank or oil company?  It's amazing how we almost rely on these annual gifts, but as times get tighter, you're seeing fewer and fewer given out.  Why not set yourself apart from the crowds by establishing your own annual tradition.  Your customers will love (and remember) you for it.  Need some more ideas of how promotional items can figure into this year's marketing plan?  Contact us today! 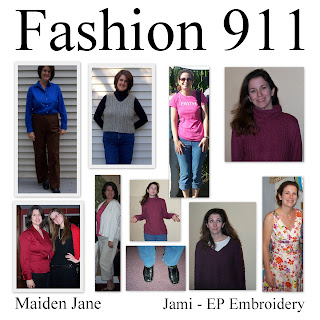 Are you up to a challenge?  Are you "fashion fabulous" and willing to give some advice to a somewhat "frumpified" friend?  Well our friend Maiden Jane and our manager, Jami, have got just the thing for you!  Follow Maiden Jane and us on Pinterest and enter our Fashion Challenge giveaway.  The winner will receive one of Jane's gorgeous handmade totes and have it personalized by our store! Read more about the rules here. Happy pinning!

Posted by EP Embroidery at 9:58 AM 0 comments

EP Embroidery
Littleton, New Hampshire, United States
Embroidery By Everything Personal was founded in 1994 in Manchester, NH specializing in custom embroidery. Our full range of quality wearables and accessories can be embroidered to enhance your company's image, provide distinctive identity to your club or team, or create the ideal gift for any occasion.

Want more Embroidery by Everything Personal? We can't say we blame you!

Embroidery by Everything Personal

Promote Your Page Too